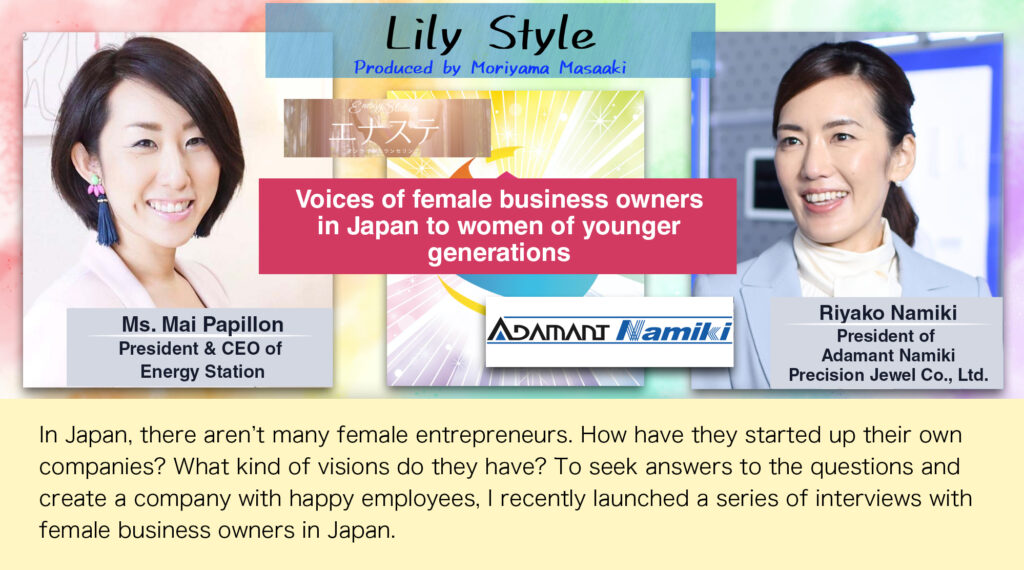 Today, we invite Ms. Mai Papillon, who had served as a secretary to the executives of a major Japanese manufacturer for 18 years and then founded her own consulting firm, Energy Station. During her stint at the manufacture, she closely observed and learned how her bosses resolved their problems. She also took counseling lessons to understand what her younger team members were thinking about. Two years ago, she started her company. The firm has three counselors and a layer who gives legal advice. Though Ms. Papillon initially tried to focus on face-to-face counseling, she has switched to an online counseling. The other company staff members also work online, so they have never had an all-hands in-person meeting.

Lily: Could you tell us about your company?

Papillon: I worked for the manufacturer as a secretary for 18 years. After quitting the firm, I gave some corporate training lessons and then I shifted to online counseling because of the pandemic, my relocation to Canada and other reasons.
As I have a license of a psychological counselor, I started to offer counseling sessions and then I found that it requires legal expertise to resolve clients’ problems. Now, I have my co-workers who support me.

Lily: On your corporate website, you post the sentence: It’s OK not to be OK. The line sounds very impressive to me. Where did you pick up the sentence?

Papillon: When I was studying at a high school in the U.S., my host mother gave me the words. I guess I looked like pushing myself too much. I had strongly believed that I shouldn’t whine, even though I was just spinning my wheels. Since I was small, I had believed that it is important to work hard. My host mother said that there were no specific goals I had to achieve during the year and I should enjoy the environments, which she said would pay off eventually. Her words made me relax and I still cherish the words.

Lily: After that, you came back to Japan and worked in the country. Currently you live in Canada. What has brought you to Canada?

Papillon: Because I got married to a Canadian man. I had got married to my first husband when I was 24 but divorced at the age of 30 for various reasons. Then I stayed single for 10 years. After getting acquainted with my current husband, we got married in two months. I had hoped to live abroad, but I had never imagined that I would realize my wish in this way.

Papillon: When I was young, I firmly believed that a marriage would make me happy. However, my first marriage taught me that wouldn’t be always the case. The experience convinced me that I should live my life as I like, without repressing my thinking and feeling. Then, I started to have a doubt about my job – belonging to an organization and serving to a management position. I was aware that there existed a sort of glass ceiling at the company and I knew that I wouldn’t be able to go above it even if I continued to work there. That was not an attractive life for me. If so, I should explore new frontiers and live and do whatever I like, I concluded.

Lily: Many people are working hard to realize their ideals, or what they think they should accomplish, but it’s important to feel happy about what they are doing. I think you are trying to help your clients feel happy through counseling. I believe that our various experiences would help us mature as a person and make our life happier.

Lily: Why did you start counseling?

Papillon: When I was a manager at the company, I struggled because I couldn’t figure out what younger employees were thinking. I thought I could understand them if I study psychology at a school. However, on the first day of my class, I was taught that it’s impossible to change other people while I could change myself. I was convinced with the idea. So, I started to do a self-analysis; I couldn’t understand young staff members maybe because I had a stereotype and I did have a problem as well; why I felt sad on some occasions and reacted as I did, etc. I was absorbed in reflecting on myself.

Lily: You did a self-analysis, didn’t you? Then you have come to think of using the counselling skill for other people?

Papillon: As I was still working at the company, I began to apply the skill to communications with my bosses. Shortly after, they began to talk about their private issues to me, which led them to trust me more and helped me do better with my job.

Lily: I totally agree with you. Being an athlete, I also like to practice very much. I have believed that I would be able to manage things if I practice many times, say, 100 times.

Papillon: We may fail at first, but if we keep doing it, we can find a way. Those who are struggling often think too much before taking action. They are afraid of failures and other people’s reactions. It’s my job to encourage them to try. Taking action makes them feel confident. I realize the importance of taking action when I can see them act and get energized.